The climate of Britain means that wind, rain and cold days are expected throughout the summer time. In 1998 Wotton Pool thwarted the weather with the installation of the retractable polycarbonate roof. This ‘greenhouse’ can be pulled away on warm sunny days, to bathe the bathers in sunshine and warmth. On cooler or wet days the cover provides perfect shelter from wind and un-chlorinated water, and has made swimming in the rain a viable option. 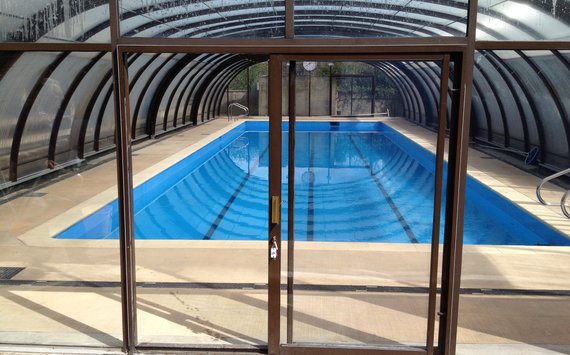 In 2001 an off peak electrical heater was installed to supplement the solar panel; this has the effect of extending the season, and means that a minimum water temperature can be achieved, whatever the weather.

In the last few years the faithful solar panel broke down, with the result that the pool’s heating was provided entirely by the previously supplementary atomic heating system. Unsurprisingly this caused a hefty annual electricity bill, and perhaps contributed to, along with nationwide funding cuts, Stroud District Council’s decision in 2010 to discontinue their involvement with the pool.

However, as reported on other pages, a new company was set up in 2011 to run the pool, and had a very successful first season. So despite this set back, the future looks promising for the pool under the new management of Wotton-under-edge Swimming Pool Ltd., who hope to return the pool to its former glory and popularity.

Since 2011 much refurbishing work has been done to the pool and its facilities, as necessity and funds have dictated.  The most significant and obvious of these have been from about 2015 to today, 2020.  The first task was to break up and remove the old and tatty poolside and external concrete paving.  This was then relaid in large panels of lightly coloured concrete, with careful falls to ensure good drainage in the desired directions.  At the same time opportunity was taken to install wiring to underwater lighting for the pool water, as well as drainage channels surrounding the pool and the enclosure, It was at about this time that the external showers were fitted, with their own local drainage channel.

Over the years much discussion has take place about replacement of the original wooden changing hut, assembled in about 1961 from a flat pack!   By 2016 this had become very dilapidated looking, and investigations showed considerable rot and deterioration. It also had an asbestos-cement roof which was no longer acceptable.  Several attempts were made, even well before Wotton Swimming Pool Limited took over to find new and affordable designs to replace the hut.  None were both acceptable and affordable, and most were neither!  Eventually the decision was taken to restore the original building, as this could be done off season, piecemeal, (and hence affordably) and to a higher standard than the original.

Work started on the roof in Autumn 2017, using specialist contractors to remove the asbestos, and to replace it with modern corrugated and insulated roof panels, coloured black.  Following this, volunteers installed piping along the roof crest and just above the guttering, and laid black plastic tubing between them in the valleys of the roof.  The entire roof was then covered in polycarbonate sheeting to make essentially a greenhouse for the tubing.  After plumbing all this to the main recirculation system for the pool water, with a set of small pumps and computer controlled valves we had at last a new solar heating system to match, or better, the original which 'died' in the early 2000s after many years service.  This can produce over 40kW on a sunny day and saves much expensive electricity.  For comparison, our electric heater has a rating of 48kW, and would otherwise run up to 7 hours a night.  It is still needed, but only at start and end of season, and in cool spells to maintain the pool at 28C to 30C.

In 2018 it was time to tackle the building structure and cladding.  This was another job done almost entirely by volunteers, including a professional carpenter.  One 'panel' of the building at a time, the external cladding was removed, usually to reveal very rotten structural timber up to 1m above the foundation!  This was all replaced, while carefully propping up the building, and then re-clad in new planking. This job took many weeks over the winter, but improved the appearance enormously, not to mention the confidence of the team to enter it!  An addition that winter was the verandah at the South end of the hut, to provide a sheltered area for parents to wait for their children, and to hold birthday parties and the like after a party swim.  It has a great view and has proved very popular.

It was time to do something about the interior.  After numerous meetings and much discussion, it was decided to maintain the basic idea of simple communal changing, but to add some family/disabled changing, and a disabled toilet.  In addition, the 'office' would be incorporated into the building, with storage behind it.  This involved totally gutting the interior, re-plumbing toilets and basins, and re-wiring the building to modern standards and using modern easyclean finishes on the new walls.  The work has been completed over the 2019-20 winter, and would have been ready for the opening of the season had not the Covid19 crisis arisen.  It is a great improvement.

The other, and final, work completed late in 2019 was to completely remove the existing paint in the pool tank and replace it with multicolour tiling.  Rio Pools did this work for us, and as you can see from pictures on this website it looks excellent.  Moreover, it should last without major maintenance for a good number of years, unlike paint which never lasted more than two or three seasons.

So at the time of writing in May 2020 the refurbishing of the pool and its facilities is essentially complete.  If only we could use it!